Posted on September 28, 2018 by The Brave News Leave a comment 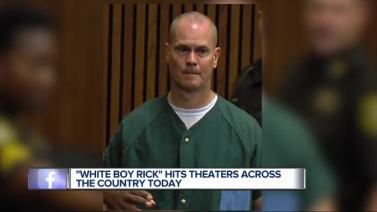 When you think of 14-year-old boy trying to make extra money, you may think of a fryer or a dishwasher, but for “White Boy” Rick, he is an overachiever.

Rick grows up in a pretty toxic environment during his childhood. His sister is a drug addict, his dad is a gun dealer and his mom is not in the picture. He has a job for his dad’s company, as he spends time watching his dad buy and resell guns.

The two become partners in this gun business and plan on opening a VCR store in the future. Eventually, Rick starts exploring the streets on his own and sells some of his dad’s guns to local drug dealers at the young age of 14.

Soon after Rick does this, the FBI interrogates him and essentially threatens Rick to get them inside information on the local gangs around the city for pay. When they first offer this to him, Rick turns it down, but they threaten that if he doesn’t take the gig his dad will be going to jail, so Rick accepts the offer, trying to save his dad.

Now, Rick is caught in the weird situation of working for both sides, and it’s a lot to handle for a 14-year-old boy. He drops out of school and and is dedicated to his  gang full-time, which is ran by kingpin and street legend Johnny Curry. Curry takes Rick in like his own son and gives him things his actual dad couldn’t give him. However, Rick now feels guilty since he is still working for both sides.

The film’s only real problem is that the basis of the movie is very predictable, ending like most American gangster movies. If you love and watch plenty of gangster-mob movies, you can pretty much callout how a lot of these movies end, which reigns true with “White Boy Rick.”

However, this film gives us something we really don’t see in a lot of gangster movies, as the plot revolves around a 14-year-old kid trying to make life better for his family and keep his dad out of jail.

This movie really had strong family values that the directors stick by and highlight often throughout the duration of the story. Even though the story revolves around gangsters and street business, it relates back to family. That’s something that really made this movie special in my opinion.