Life of a Brave: Nnamdi Chugbo Breaks the Mold

Posted on October 18, 2018 by The Brave News Leave a comment

Traditionally, the Brave of the Issue has been awarded to exceptional Bosco athletes and scholars, such as Jaiden Woodbey and Colby Bowman. However, even these illustrious awardees haven’t achieved some of what class of 2019 senior Nnamdi Chugbo has in his own time at St. John Bosco.

Nnamdi has always grown up not only believing, but knowing that he was destined for more in life than just traditional standards in which to conform.

If he was going to reach his desired point of success, it would be through an alternate route. A route that many of today’s youth are discouraged from taking because of how easy it would be to fail, which Nnamdi has no fear of doing.

“I’m really not meant to be average,” Nnamdi said.

Nnamdi’s freshman year on St. John Bosco’s campus, he began to realize that he didn’t like school as much as he thought he did.

“I began noticing I wasn’t into school a lot, I would get good grades and do my work, but it was never truly something I wanted to continue or had a passion for,” he said.

Nnamdi sometimes struggles to relay this message to his family members, especially since Nnamdi has seen how far school took them. Without educational success, it’s safe to say Nnamdi’s family would still be living in Nigeria without ever having the treasured opportunity of emigrating to the United States.

“Coach Bartelt has been a great figure to me because of how expressive and artistic he is with his teaching style, also while finding a way to relate to his students,” Nnamdi said.

According to Nnamdi, he appreciates Mr. Bartelt’s lack of inhibition in being “out of the ordinary.” This alone made it easier for Nnamdi to grow closer to Mr. Bartelt on and off the court.

Another place Nnamdi drew inspiration from was the music industry. Being a huge fan of the artist Tyler, the Creator and his collective Odd Future. 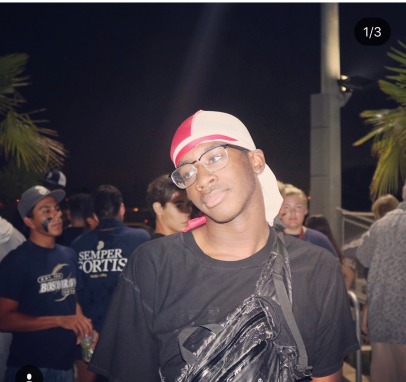 “I liked their music a lot, but their sense of fashion along with the way they carried themselves really inspired me,” he said.

This gave Nnamdi the idea to start learning how to draw and concept some of his own fashion designs. Whenever he had the time in class or at home, he took the time to do whatever he could in his notebook.

Eventually with the feedback he was getting for his designs, and the fire burning inside him to showcase his talent, his first clothing release came December 1, 2017 during his junior year.

With this release, Nnamdi’s buzz and fanbase began to grow with the heart of it all being in the Cerritos area, which is also Nnamdi’s hometown. His brand began to expand into the schools in that area, like Gahr, Artesia and Cerritos High Schools.

The Bosco student body has always backed Nnamdi’s brand by wearing it, and posting any Saint t-shirts and hoodies that they buy.

“I feel like social media is a big part of everything bro, because nowadays everyone has an Instagram, Twitter, or Snapchat and I even have my own website now which is saintmob.com,” Nnamdi said.

He credits a lot of his success to social media, allowing his clothing to not only be sold locally but with getting out of state purchases ranging as far as Germany.

With it being Nnamdi’s last year in high school, he can’t wait to tackle the real world in front of him. He hopes to gain plenty of internships within his business major and network with people who can get him contact with higher ups in the fashion industry.

“Other than the school aspect, going out into the world by myself, meeting more people in the world and making my own connections will be extremely important for my brand and is going to really help skyrocket Saint’s growth and sales,” he said.

Nnamdi has made it a serious point in his life to never be complacent where he’s at. He wants not only his brand but himself to continuously evolve. He believes that this is because of the hunger he has for his form of success.

“When I do something new, it is only cool to me for a few days. My main focus is to keep pushing and get better at the things I do,” Nnamdi said.

Keeping himself happy and making those around him proud is what matters the most to Nnamdi.

For those of you Braves who may have similar aspirations to Nnamdi, here’s his best advice to you: “If you are planning to do something, then do it. Don’t hesitate, we only have one life and you have to do what you have to do. If something makes you happy, don’t let others opinions get to you. No one else can make you happy except yourself.”