Around Bosco: Decathlon Represents in Trip to Philippines

Posted on October 14, 2019 by The Brave News Leave a comment

Vice Principal Mr. Edgar Salmingo returned from Manila with our Decathlon Program with “Coach of the Year” honors to his name, as Bosco students competed against 600 schools from thirty countries. As a result of their success, they qualified for the next stage of competition, The Tournament of Champions, at Yale University. 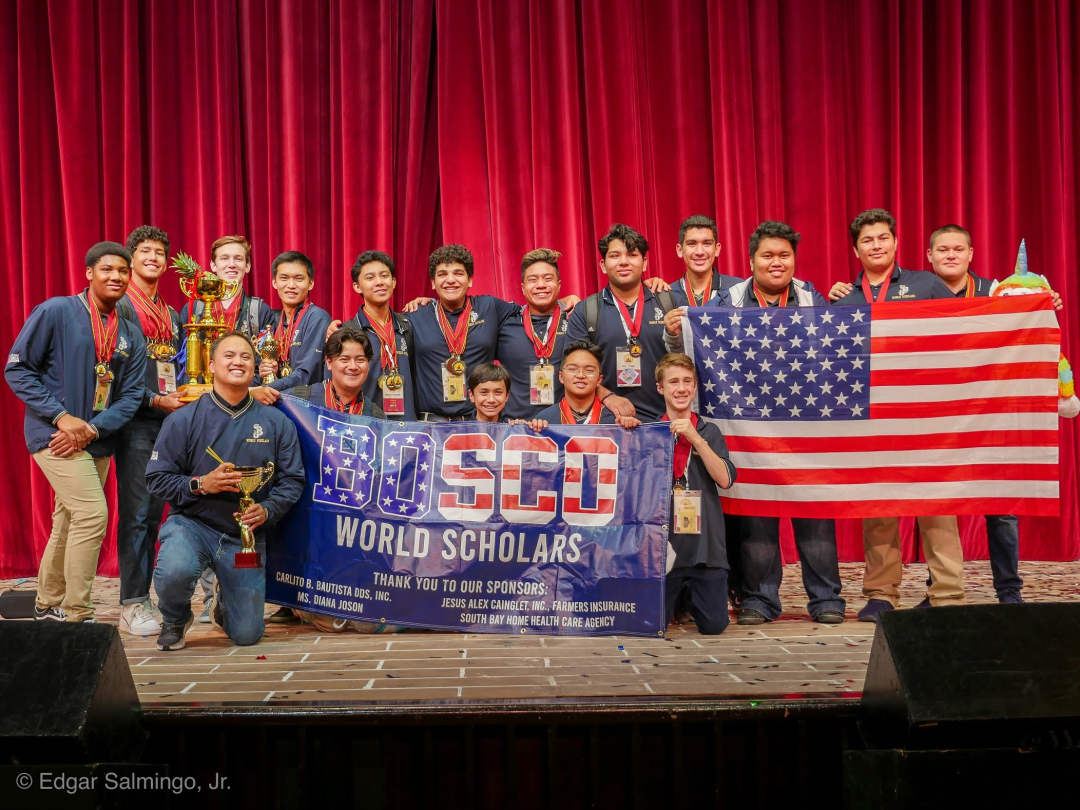 While the football team was traveling across the country, our Brave Decathletes took a fourteen-hour trip over the Pacific Ocean and across the globe. Having such a long trip gave competitors time to study and, less importantly, watch all the complimentary movies. The food on the flight was inviting and so were the stewardesses, both of which added to create a hospitable environment throughout the long flight.

Our Decathlon group placed 20th out of 600 high school teams. There were all sorts of different age groups. One Saint John Bosco student who went was junior Robert Hernandez, who really enjoyed his trip.

“It was cool to fly with my Bosco peers and represent with people I was friends with so that made it better,” said Robert.

Robert Hernandez looked forward to meeting so many people and making friends with people from other countries. He wishes he could have studied more so he could have done better. Next year, his goal is to be the best in his class and to study more. Another junior competitor that took the trip is Charlie Carrera. Charlie looked forward to seeing new places and being out of California. Charlie was proud and humbled to represent Bosco.

“I felt like it was a huge responsibility to do good because we were representing Bosco,” said Charlie.

Charlie did very well in the Decathlon, leaving with some medals and even a trophy. He wants to continue to do good and earn more medals and get another trophy.

Senior Nathaniel Quigg took one of his last decathlon trips with the Braves, and it was a trip he won’t soon forget.

“I was most excited about meeting competitors from all walks of life, and the Cultural Fair was the apparatus for that to happen. Booths from every country filled the ballroom and the smell of distinct candies and fruits filled the room, it was a great experience,” said Nathaniel.

Nathaniel Quigg was in a team of three facing the best and brightest 200 teams from around the globe. Nathaniel’s teammates were Christian Brueggeman and Valley Lin. Their team placed 15th overall. Their highest placing was in the Scholars Bowl- 8th place in the competition. Nathaniel Quigg placed 22nd place out of 600-700 competitors with his highest placing being 16th in the Scholars Debate Scorer. Being able to represent Bosco outside of the US was a big deal for Nathaniel because they are known as the team that does well and has a good reputation to keep so it brings a lot of pressure. Bosco Decathlon also got to visit our brothers, Bosco Technical School in Manila.

“It was like seeing our brothers from across the world, we had the opportunity to share stories and compare our schools as institutions as well as homes,” said Nathaniel.

Nathaniel Quigg loved his trip to the Philippines and was saddened by its conclusion, as he wishes he could have stayed longer.

“I’d definitely wish to stay longer, the people, atmosphere, the whole environment was something I wish would’ve lasted longer than it did,” he said.

One high that Nathaniel had was being able to venture out into an area of the world he wouldn’t normally be exposed to. He values their excursion to Bosco’s Technical School so much. One low that he had was saying goodbye to the coaches, adjudicators, and fellow competitors he gotten to know and come friends with was tough. He is content with knowing that some are still in contact.

With the success of The Bosco Decathlon, they qualified for the next round- The Tournament of Champions- at Yale University. This should be a great test for Bosco Decathlon, a program that is on the rise!