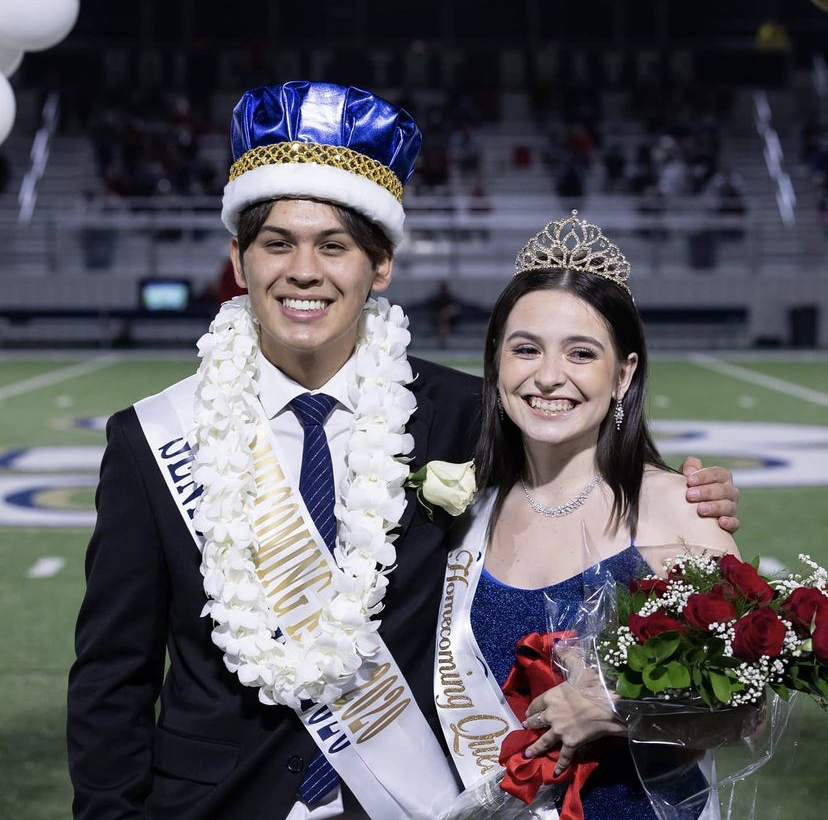 This year’s court was made up of two juniors and three seniors from each school. The king and queen were revealed at Bosco’s senior and homecoming night football game. For St. Joseph’s, senior Allison Gomez was crowned queen, and Bosco’s very own, senior James Pearce was crowned as king.

James was quite surprised first when he was nominated to the court and then later when he was announced as king. And with the signature James-style humour, he made sure to note the mispronunciation of his name at the homecoming game:

“Contrary to popular belief, though, I, James Pearce, was never crowned king. The announcer actually pronounced the name correctly, and James Parce was actually homecoming king. I was just the first person to step forward so they gave me the crown,” he said.

James was also a member of the winter formal court in early 2020 as a Junior.

“Formal court last year was super fun. I got to play my melodica in front of the SJ student body, wear a crown, and wear a cool sash. That’s all you can really ask for,” James said.

For the past four years, James Pearce has been one of the most active members within the Bosco community. His involvement and esteem around campus made him the ideal candidate for this year’s homecoming king.

One of his most prominent roles includes his positions within ASB. He has been a member of ASB for the entirety of his time at Bosco, and now sits on the Executive Board as Vice President. During his time on the Executive Board, as well as other class boards, he has assisted in leading the school by helping plan multiple events and by contributing to discussions to improve student life.

If there is one word that describes James, it is consistency. Whether it is consistency on ASB, within the classroom, or with different extracurricular activities, he continually follows through on anything that he starts.

Take tennis, for example. James has been playing tennis for over a decade. When he got to Bosco, he was thrilled to be a part of the tennis team. An early standout on the team, he is now the captain. Each year, he was excited to meet a new group of team members to bond with.

“I really like Bosco tennis because I was able to challenge myself playing against some very competitive teams in the Trinity League while I was still able to teach and mentor the guys on the team, especially as captain this year,” James said.

With the season not yet over, James hopes to finish the year off strong.

James has enjoyed his time at St. John Bosco. He recalls one of his favorite moments.

“My favorite memory at Bosco has been when I drove my friends around one night after a gig. I had bass boosted music bumping in my car as we drove through a crisp winter night and ate Chick-fil-a in my car. There have been many nights like this at Bosco for me, and every one of them has been memorable in their own way.”

For James, moments like these define his Bosco experience.

“I feel the Bosco brotherhood for me has always been defined by going out to eat after a night of something crazy happening, just sitting down with your best friends soaking in the moment,” said James.

James is pretty busy outside of Bosco as well. He is the Vice President of a youth advisory council of a community service group known as PKG, which is a nonprofit organization that connects teenagers with meaningful community projects. He specialized in the tech committee and even helped the nonprofit operate during COVID.

Along with this impressive community service, James also has been teaching piano to kids over the past two years.

“It’s really meaningful for me to see them get inspired in piano and music in the same way that I did when I first started taking piano lessons. I hope not just to teach them piano, but give them a skill they can take throughout the rest of their lives,” said James.

In his free time, James stays busy practicing piano, watching YouTube or Twitch, or playing video games. He has recently started sketching a little, and said he has gotten a little bit better. From the looks of it, James pretty much does everything.

James has a bright future ahead of him. He plans on attending UC Berkeley and will study computer science and music. He is looking forward to his future in college and his career afterwards.

“Ultimately, I hope to just not have to worry about money in the future and be able to live freely and artistically,” James said.

James Pearce is a well respected and highly admired member of the community. His fun personality is cherished by everyone who knows him, and he has gone above and beyond in everything he has done. He has left a long lasting legacy while at Bosco, and he was a perfect fit as the 2021 homecoming king.