The St. John Bosco Braves started their national championship run yesterday with a 49-0 triumph over Timpview High School from Utah.

This game was over midway through the 2nd quarter, as Bosco led 28-0 following another touchdown strike. The festivities started early and went through the night, as the Braves entire student body, faculty, coaches, and players welcomed the new, beautiful Panish Family Stadium.

The athletic stadium is a state-of-the-art piece of work, beautifully designed for all athletic teams within Bosco to use for their seasons.

The Braves high-powered offense got off to a bit of a shaky start, as an unlucky deflection ended up in a Timpview defensive backs grasp, giving Braves star quarterback DJ Uiagalelei his first interception thrown of this season.

The Braves defense would shut down the Timpview offense on this drive like they would all night long, and Bosco’s offense would match the defense’s high level of play.

Uiagalelei delivered a strike over the middle to senior wide receiver Jake Bailey on the next drive for the first touchdown scored in the new stadium.

Running backs George Holani and Keith Savage would follow up with rushing touchdowns of their own in the first half, and the Braves defense would continue to force turnover after turnover all night long. 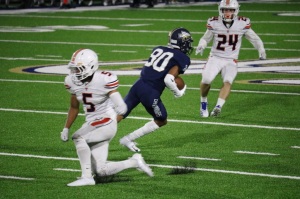 USC commit and 6-foot-6 tight end Jude Wolfe also caught a 1-yard touchdown pass for the Braves, following a Kris Hutson deep catch down to the Timpview 5-yard line in the third quarter.

The Braves are #1 in the nation on MaxPreps for a reason. It’s no secret to anybody that this stadium is not going to be an easy place to play in, especially with the performance of the Bosco fanbase and the team here in week 1.

The Braves will look to continue their success next week away in Bakersfield against Garces Memorial.