Posted on September 1, 2018 by The Brave News One comment 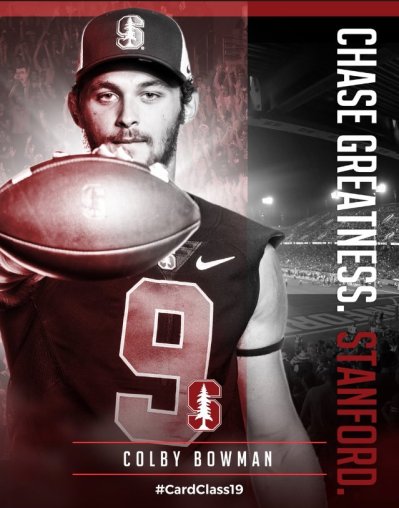 Colby Bowman transferred to St. John Bosco High School after his freshman year and immediately fit into the winning culture at Bosco on and off the field.

Bowman heard about the Brave football powerhouse not only from all the friends he had going to the school, but also through playing against (and getting beat by) Bosco during his freshman year at JSerra.

“After playing against Bosco my freshman year, I knew right away what school I was going to next year. The way they played like a team and with passion really caught my attention,” said Bowman.

Bowman started playing football at the age of six and fell in love with the sport from day one. Ever since then, he dreamed about playing the game professionally and realized in 7th grade that Stanford University was where he wanted to go to further his academic and athletic careers. When he received a full ride scholarship to Stanford this past year, he did not hesitate to verbally commit to the school and become a Cardinal.

“Once I got the offer, it was over […] it really feels like a family there [at Stanford]. Also, the combination of academics and athletics is something you can’t find anywhere else,” Bowman said.

Bowman will without doubt be a great fit at Stanford. He matches the skill he demonstrates on the field in the classroom, earning a 3.5 GPA or higher all through high school.

“My parents have always pushed me to give it my all both on the field and in the classroom. I’ve also always cared about my academics because football ends one day.”

Aside from his academic skillset, his skillset on the field is something that the number one nationally ranked Bosco football team is going to heavily rely on this season. His 6-foot-2, 191-pound frame alongside his game-changing speed make him a really tough guard for any defensive back in the Trinity League.

“Colby’s a deep threat that we can depend on to go and make big plays for us,” said senior outside linebacker Ralen Goforth.

Alongside his talents in football and academics, Bowman also has the will to lead others and bring players closer together on his team. He leads by example with his knowledge and wisdom from all the years he has played the game. Also, he cares for everyone on the team no matter the role of the players.

“He shares his experience and passes it down to the younger guys. Whenever someone is down, he is right there to bring them back up. It’s something I admire from him,” said Goforth.

Being the top-ranked team nationally, the Braves will need Bowman’s understanding of the big stage and the bright lights, especially younger players once league play begins.

“Every single game you have to bring your best because teams are going to bring their best to try and beat you. Our brotherhood is at a high point right now and we have to stay together as a family,” said Bowman.

With college in his sight, Bowman is always thinking about his near and long term future.

“I see myself graduated from Stanford and waking up to a job I am passionate about. I see the NFL as a bonus.”

Even though he is excited to finally go to the college of his dreams, Bowman will miss the times and memories he made here at Bosco. When the time finally comes to say goodbye to all his friends, he said it will be tough for him.

But in his last season here, he would like to go out and bring a national title to the school. He wants to leave everything on the field and be a part of something great in his senior year.

tagged with Bosco Athletics, Bosco Football, Brave of the Issue