Posted on September 15, 2018 by The Brave News Leave a comment

The number one high school football team in America dominated again last night in West Hills against Chaminade, winning 56-20 and capping off an undefeated preseason before league play begins. 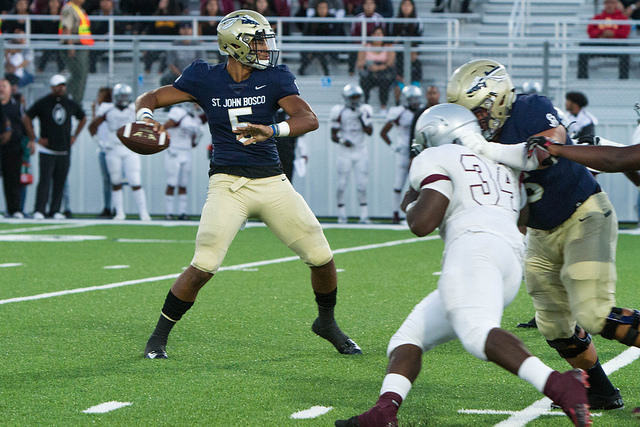 Bosco started hot again behind star junior quarterback DJ Uiagalelei, who led the team to a huge lead at halftime. Uiagalelei is still near-perfect on the season, going a ridiculous 52/69 in passing attempts with 16 touchdowns through the preseason.

The Braves offense got a great contribution from senior running back George Holani last night, who punched in three touchdowns on the ground for the team, all in the first half. Junior Keith Savage also had a rushing touchdown.

Bosco’s defense also did it’s job – as it has all preseason – last night. Both units are working very well and cohesively at the moment, which is a great sign leading into league play in just two weeks.

The Braves have a bye week next week to rest and time to prepare for their first league game, September 28th at Panish Family Stadium against JSerra. The game has already been pre-labeled as the Fox Sports “Game of the Week” and will be televised.

This game should be the first true test Bosco receives this year, and it will be exciting to see how this talented Braves squad reacts to potential adversity. “The Tribe” will need to be out in full force and in heavy support for this one.