Posted on November 17, 2018 by The Brave News Leave a comment

The start of this game didn’t go extremely smoothly for the top-ranked Braves, as Oaks Christian came out strong and tied the game at seven early on. 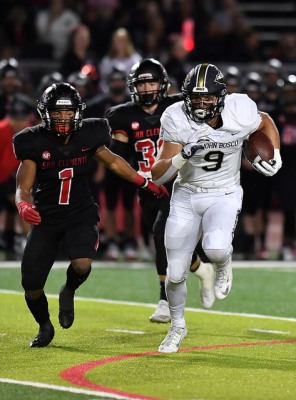 Braves quarterback DJ Uiagalelei threw just his fourth interception on the season and Oaks running back Zach Charbonnet ran for a 61-yard touchdown.

However, the Braves took control and dominated the game from that point on.

The Braves took a comfortable 35-10 lead into halftime, and kept their foot on the pedal in the second half.

George Holani ran for two scores in the second half and sophomore standout wide receiver Beaux Collins reeled in a 71-yard touchdown from Uiagalelei.

Uiagalelei finished the game with six touchdown passes, going 13/15 on his attempts with 361 yards.

Bosco handled Mater Dei easily back in October, defeating the Monarchs 41-18 on the road in a statement victory.

However, Mater Dei will for sure be better and more motivated to play this time around, so Bosco will need to be ready to play.

The Braves are two wins away from a state and likely national championship, and we’ll have the breakdown here on The Brave News later this week.