Posted on January 16, 2019 by The Brave News Leave a comment

As Los Angeles Unified School District teachers fight for smaller classrooms sizes, better pay, school funding, and an increase in school staffing, a huge strike has occurred within the district. 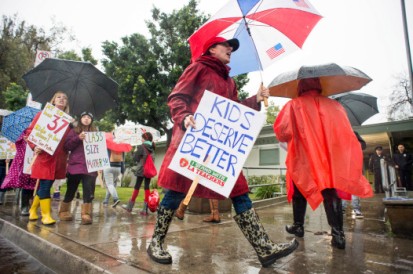 There are roughly 1,240 schools affected by this teacher strike and 600,000 students. Around 32,000 educators are going to be on strike. LAUSD has had to hire 500 substitute teachers in response.

Teachers have been talking to the state superintendent, the Mayor, and the Governor. Jerry Guzman’s daughter is among the children affected by this teachers strike.

“Our children need to be in school, and our teachers also need the tools they need to successfully do their job,” said Guzman.

As of Friday, the last proposal to the United Teachers of Los Angeles was made and was rejected.

The last strike of this magnitude was 30 years ago. These teachers are fighting for the same rights as those of the past.

Teachers are speaking out on this matter as well.

“We know that parents don’t have the means to provide adequate care during the strike. We hope the district and union come to resolution fairly quickly,” said Lisa Duarte, a teacher in the LAUSD.

Teachers are asking for class size reductions through the hiring of more teachers. Most argue that 40-50 students at a time is way too many students in one classroom.

“We want to ensure no increase in any class size, increase nurses, counselors and librarians at all schools, along with a 6 percent salary increase and back-pay for the 2017-2018 school year,” was the official statement released by the Teacher’s Union.

According to the LA Times, Los Angeles Unified School District schools lost $15 million on the first day of the strike.