Posted on January 16, 2019 by The Brave News Leave a comment

For the past nine weeks, protests continue to rage on all over France – mainly in Paris – by a group called the “gilets jaunes” or the Yellow Vests. 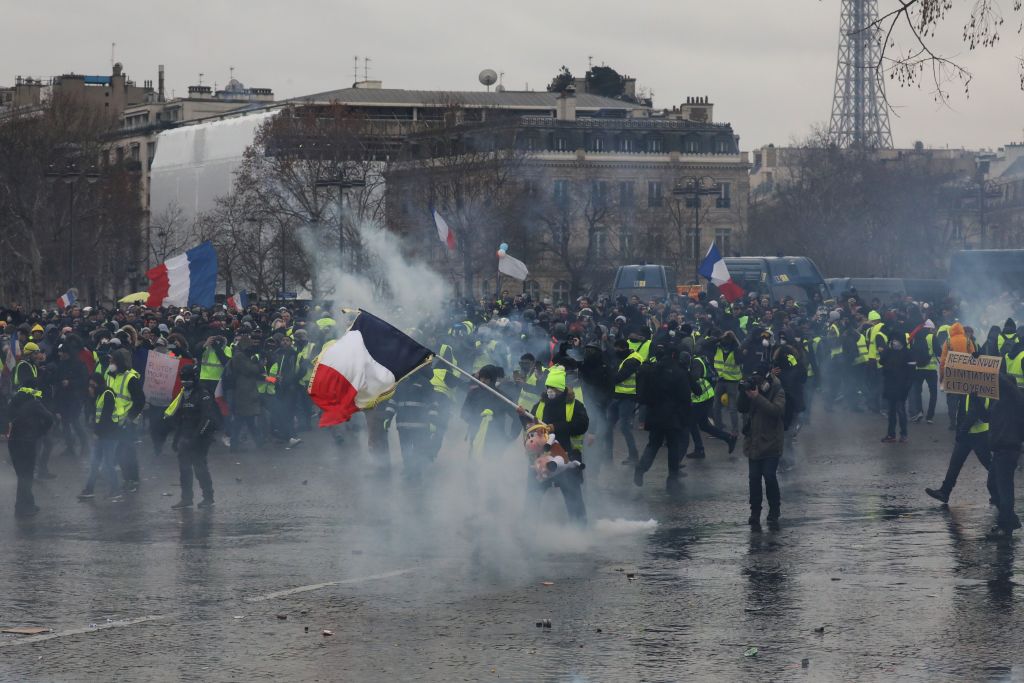 What started as a peaceful protest against a controversial fuel tax and economic reform has turned into riots demanding the resignation of French President Macron.

The fuel tax that President Macron implemented to cut down 40 percent of carbon emissions on pollution faced much resistance due to the increased price of gas. After the protest began and turned violent, Macron backtracked on the fuel tax and suspended the tax as well it cut from the 2019 budget.

The anger from the people hasn’t stopped however, and the violence still goes on. Now, the protests have turned into anti-government riots, which occur weekly.

In the latest week of protests, authorities deployed 80,000 officers around the country to control the violence that occurs every time protesters emerge on the weekends. From the protests, vast amounts of damage has been done to businesses and property, government or privately owned. An estimate of 60 percent of the speed camera network of France has been destroyed or vandalized, stated the country’s interior minister.

The protesters consists the majority of the middle class who reasons vary amongst themselves. Coming from both Left and Right political views and parties, one common thing to which they compare is there distrust and hatred for President Macron. The group doesn’t have a leader to their protest, but rather just people uniting against the government.

For the Yellow Vest, there isn’t a specific or symbolic reason why they wear the yellow safety vest when protesting. Their reason to wear it is simply so the protesters have something in common to wear.

Recently, Macron has asked for direct dialogue with the protesters in a month long debate between the two. President Macron seems to be willing to discuss his policies that he wants to implement and some of his actions. In a 2,330 word letter that he published towards the Yellow Vest protesters asking for dialogue, Macron added in a series of questions which he hopes to be answered.

Some questions are listed below:

The Yellow Vest protest in France has influenced anti-government sentiments amongst other countries, such as the United Kingdom and Canada. In the UK, Brexit protesters have decided to dawn the yellow vest in solidarity towards their cause and distrust into the imposed government. They as well stand for a variety of reasons. A leaflet about what they support and are against was recently passed around and posted on social media.

The Canadians that wear the yellow vest in protest to their Prime Minister Justin Trudeau are over gas laws and immigration. However, they are a smaller group and not that renowned compared to their European counterparts.