by Joshua Lucero and Elijah Ramos

What is the Dark Web? The Dark Web is part of the world wide web that can only be accessed by a special software, allowing participants to be anonymous whilst participating in illegal activities. 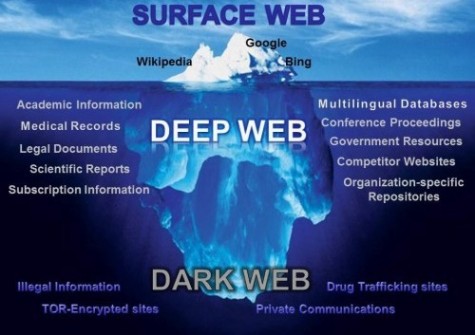 The Dark Web is more than just a label that has been given by the feeble minds of those who do not understand the magnitude of this creation.

The “Dark Web” and “Deep Web”  can be seen as separate online resources. However, the Deep and Dark Webs are virtual seas where users can access information that they cannot in regular search engines such as Safari, Yahoo and Google.

The Dark Web is purposely hidden and encrypted from others. These encryptions include sites that distribute drugs, guns and other illegal products.

This separate part of the internet has seemingly always been there, but no one truly knows who exactly created the Dark Web. Even though the direct origins of this system of secure servers is unknown, there are still speculations.

The Dark Net is the foundation of the accessible tool TOR (The Onion Router), which was created in the 1990s by the U.S. Naval Research Labs funded by the Defense Advanced Research Projects Agency (DARPA). The use of TOR was created to keep people anonymous when accessing and communicating on the internet.

This use of TOR was to protect field agents when talking to their handlers. They would communicate on a secure network, and through the use of TOR, their IP addresses would be scrambled and become unrecognizable. This main basis of TOR was to benefit those who would participate in endangering their lives in operations that were classified to the public.

TOR was created by Paul Syverson and two other mathematicians who began to make this concept a reality. When these men created TOR, it worked by hiding a user’s IP address as it passed through other random IP addresses in the onion server before reaching the final destination.  In the earlier stages of TOR, only law enforcement was using this secure site. Even though TOR would bounce their messages through other IP addresses, it would be relatively difficult to spot a user.

The way onion users were spotted was easy, because the person’s final IP address that the website would see would be marked from the onion server. This meant that even though they had a “secure” way to talk, if someone saw the onion IP address it would automatically be assumed that law enforcement was involved. Therefore, they would release this tool of secrecy to the public so their hidden eyes could be more protected by having more users.

In 2002, TOR became open to the civilian population, as the government started downplaying its military origins to attract a wide pool of users.

During that time and still today, the Deep Web provides easier, more secure way to engage in illegal activity without high exposure. The Deep Web, with the help of TOR, became a space in which people who enforce the law, those who oppose it, and those who have a sense of curiosity for the unknown began to rub virtual shoulders.

In short, the start of TOR brought into the world what we know now as the Deep Web, the Dark Web and its many other names.

Overall, the Dark Web is creating a rise in the criminal underworld that has and will continue to rise with the evolution of technology. The Dark Web is something of a virtual Costco where there are endless supplies to what the buyer wants.

Jobs on the dark web can consist of delivering unknown packages from point A to point B. A driver can accumulate $1,000 a week if packages are consistent and of the same market price. Others can make more depending on the value of what is in the package.

Drug dealing is a major effect of the dark web. Business on the web has boomed because of the transaction of money through cryptocurrency such as Bitcoin. With the blend of sites like Silk Road and Bitcoins untraceable currency, the dark web has a high number of customers. Sites like Silk Road are one of the major attractions for the drug trade.

Silk Road was like Amazon, or any type of online business, with established categories such as drugs, guns, jewelry, computer equipment, books and anything else you can think of. With these categories came subcategories, and if you were looking for a high of any kind, the Silk Road was the place to go. But in 2013,this site was shut down with the creator – Ross Ulbricht – caught by the FBI.

The Dark Web has limitless illegal uses and is no place for fun, nor should it be taken lightly.

On the Dark Web, illegal acts that are cultivated to seem normal when interacting in the footsteps of danger. When lurking, there are many traps that you can follow to get in situations that will be regretted by a user. The web has communications with terrorist groups, militias and other military trained groups for hire.

Hypothetically, these groups can cause mass destruction wherever they may be hired. So-called “governments” on the web could and may have hired groups to put another country at risk. This does not stop at terrorist groups, but people are able to hire hit-men to do their dirty deeds. It doesn’t stop at potentially killing someone “IRL” (in real life) but if someone needed a picture, video, or anything planted or erased, there are hackers for hire to do any job such as this. They are able to destroy anything connected to the web that needs to be destroyed.

When surfing the dark web, there are live chat rooms that would deeply disturb the average human mind. Examples of unspeakable crimes against humanity are known as “red rooms.” These rooms vary from a number of live chat and recorded videos of deeply disturbing events. These live chats can consist of victims of all ages being dragged and taken against their will to unknown places or rooms. In these rooms, there is a list of options to either torture or kill the victims.

In order to get clearance in these live chat rooms to participate, the active participant must pay the greatest amount of currency on the server. As the top bidder, they are then able to choose from a list of options that are provided to kill or torture their victim. In many cases, these chat rooms are filled with vicious people hidden behind a screen. An example of this is someone in these chat rooms winning the top bid and then choosing what to do with the particular victim.

Horrific rooms and videos similar to this can be found in the deepest parts of the dark web. These recurring rooms are only expanding. Again, this place should not be taken lightly or looked at due to childish curiosity.

Even though people may not have the intentions to look at this type of material, it is easy to let one’s curiosity get the better of them. There are no second chances when interacting on these levels. Viewer discretion is strongly advised.