Posted on December 3, 2019 by The Brave News Leave a comment

The Braves marched into Cerritos College on Saturday with one goal in mind against the “Team in Red”: Revenge. They emerged from the ashes of a barn burner as your 2019 CIF-Southern Section Champions after mounting an epic comeback, putting them in the driver’s seat for a consensus national title with one more win over Concord De La Salle in the CIF-State Championship. 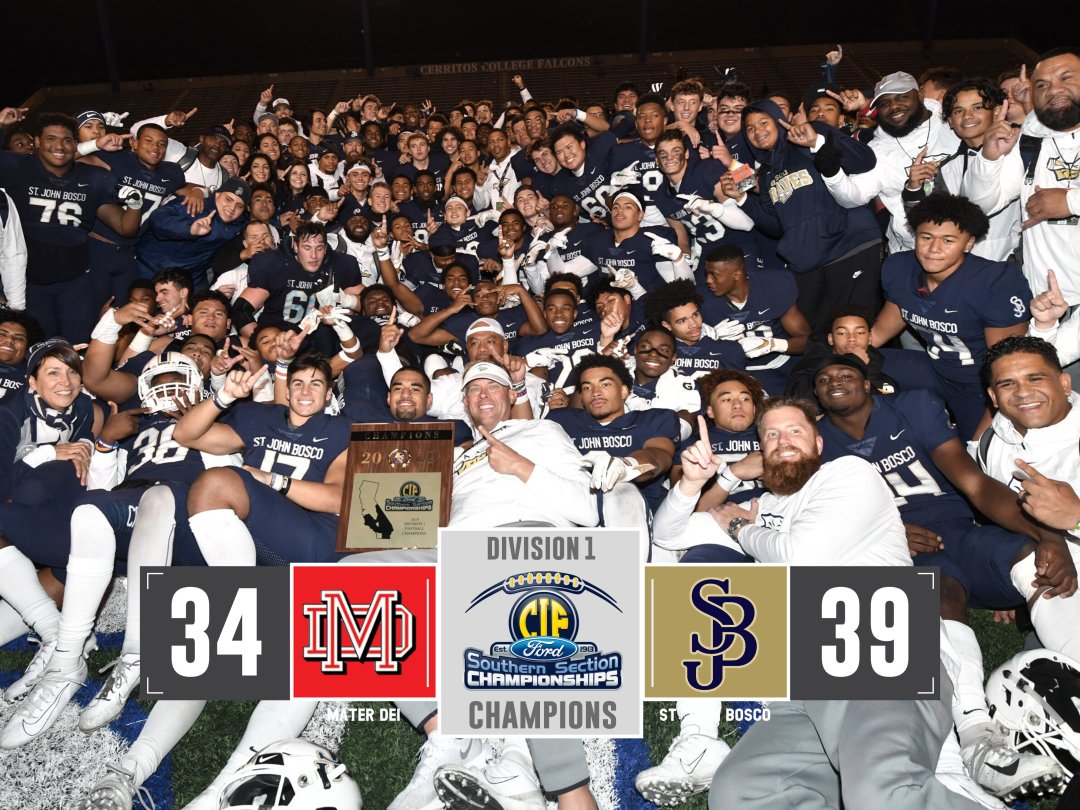 In Trinity League play, the “Team in Red” took down the Braves at Panish Family Stadium. Looking back on that first meeting, the Braves looked lost on the defensive side and at times struggled to move the ball up and down the field. The beginning of Saturday’s game looked the same.

The Braves within the first three minutes of the game gave up two passing touchdowns to the “Team in Red.” The first was a 62-yard pass from Bryce Young to receiver C.J. Williams. Then, after forcing a punt, the “Team in Red” got the ball back and marched down the field, which would result in yet another passing touchdown for the Alabama-commit to take a commanding 14-0 lead in the first quarter.

In the Braves stands, it was so quiet you could hear a pin drop. Brave faces showed frustration, shock and pure disappointment. That’s how a majority of the first half felt.

With six minutes to go in the first quarter, Logan Loya marched out and drilled a line drive 33-yard field goal to put the Braves on the board.

But just as the Braves started to look like they were gaining momentum, a fumble occurred and halted the Braves’ promising drive. However, the fumble seemed to work in the Braves favor for the sole fact that it backed the “Team in Red” up against their own goalline. The Braves then sacked Young in his own end zone forcing a safety, as the Braves cut the lead by two more with 4 minutes left in the first quarter to put the score at 14-5.

The Braves’ defense was the story for Saturday’s game. Forcing 5 turnovers and 3 sacks. The first interception came late in the 1st quarter, as Jake Newman read the play and perfectly jumped the receiver, intercepted the ball and returned it for 16 yards. The Braves seemed to have captured lightning in a bottle at this point, as they looked to post a touchdown on the ensuing drive.

However, the sad fact of the matter was that as the first half progressed the Braves consistently stalled out on offense, and their seemingly lock down defense would give up two more touchdowns to Young. He completed another touchdown for 30 yards to Cristian Dixon and then a 21-yard touchdown, where Young found Williams for the second time on Saturday.

Braves quarterback D.J. Uiagalelei found wide receiver Kris Hutson for a six-yard touchdown to close out the half. The score at half time was 28-12 in favor of the “Team in Red.”

Heading into the third quarter, the Braves received the ball and would begin the comeback of the century. It would start off with D.J. finding Hutson in the end zone for a 26-yard completion to cut the game down to a score of 28-19.

Then the Braves defense stepped up big yet again. The Braves were looking to force a three-and-out, as their defense had stepped up on the previous two plays. Then coming off the edge was defensive end Jalen Woods to drop Young to the ground and force the “Team in Red” to punt the ball back to the Braves.

The Braves retook the field with a sparkle in their eyes; it was a completely different feel in the stadium than in the first half. Everyone from the players to the coaches to the fans were going nuts.

D.J. began the Braves’ second drive of the half by tossing two quick passes to move the Braves 25 yards away from the “Team in Red’s” end zone. Coming out of the huddle, the Braves offense looked calm. As D.J. dropped back, he had no one open initially, but the offensive line did a great job giving him more than enough time to locate tight end Adam Awaida for the touchdown to cut the “Team in Red’s” lead to just two points.

Then on the first play of the ensuing series the Braves would tip a Young pass up in the air and pick off the “Team in Red,” setting the Braves up with excellent field position with under a minute left in the 3rd quarter. The Braves would run to the sideline as the quarter ended waving their arms attempting to hype the crowd up, and that’s exactly what they did. The Braves would head into the fourth quarter trailing. However, for the first time during the night, they felt revenge well within their grasp.

D.J. then began the fourth quarter how the Brave faithful envisioned by snatching the life out of the “Team in Red,” as he found wide receiver Logan Loya for a touchdown, putting the Braves ahead of their rival for the first time all season by a score of 32-28.

The Braves not only took the lead; they kept it.

D.J. came out after yet another stop by the Braves’ defense and found Loya for a second time to increase the Braves lead by a score of 39-28.

However, the “Team in Red” would attempt a comeback of their own. Young would complete his fifth passing touchdown of the game to Domani Jackson, cutting the Braves lead down to a score of 39-34 after the Braves defense stepped up and stuffed the “Team in Red’s” two-point conversion attempt.

Bosco would then get the ball back and attempt to run the clock out. Head coach Jason Negro would make a decision to go for it on fourth and inches in Brave territory, and the “Team in Red” took great field position after stuffing the Braves attempted quarterback sneak.

Kris Hutson, who caught huge passes on offense all night long while playing two ways most of the game, secured his final grab not from D.J. but from Young, whose prayer ended in the hands of Hutson, deafened by Tribe cheers exclaiming relief… and revenge.

The Braves look forward to the opportunity of capturing a state and national title December 14th at Cerritos College against Concord De La Salle.