Posted on January 14, 2020 by The Brave News Leave a comment

The culmination of hard work and determination from the Braves football team all came together with a celebration of their historic achievements with the national championship parade and ceremony around the campus and inside Panish Family Stadium. 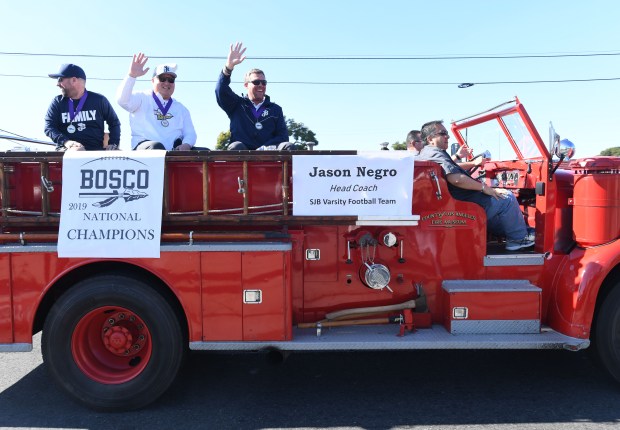 Bellflower Blvd. was packed with students, faculty, and parents as the Braves Football team paraded down the street to celebrate their historic season as CIF, State, and National Champions. This was not only an event for Bosco, but the whole city of Bellflower. Down Bellflower Blvd. fire trucks, police cars, and classic cars carrying public figures like the legendary Sam “Bam” Cunningham lead the parade while the Braves followed shortly behind on top of a couple of double-decker buses.

A few prominent players could not be in attendance for the celebration such as Quarterback DJ Uiagalelei who is away at Clemson, and Kourt Williams II who both took part in early enrollment. The Braves O-line held up a picture of the star Quarterback throughout the ceremony just to remind everyone of the beast that was slinging the ball this season.

The parade then went into the stadium where a stage was set up in the middle of the field. The championship ceremony inside Panish Family Stadium was large scale with news cameras from FOX Sports and ABC7 Eyewitness News, and important figures in the City of Bellflower such as Mayor Juan Garza. All of the accomplishments this year were acknowledged, mainly head coach Jason Negro, who received Coach of the Year and Coach of the Decade awards.

Head Coach, Jason Negro, was very humble in the process despite the winning coach of the year and the decade. However, Negro did ride in style with his brother, Special Teams Coordinator, Jacob Negro, and Offensive Coordinator, Steve Lo.

“I’m just using the platform that I have as a football coach to be able to springboard these kids into college and get them to have great lives and become good men”, Negro said.

Senior CJ Womack speaks to what this celebration means to him and his fellow Seniors to end his high school career with such an honor.

“The celebration meant a lot. Being in the class of 2020, me and my guys worked our tails off to reach this goal, and to have the city celebrate us meant everything.” Womack said.

Players and coaches were more than excited about the celebration that was brought together by the city of Bellflower. The most enthusiastic was Wide Receiver, Kris Hutson.

“It’s awesome to have this parade celebrating us,” Hutson said.

The parade was special for this program knowing that they have finally achieved the goal they have been striving for ever since the 2013 team. All of the adversity this program had gone through over the past couple of seasons made this celebration even sweeter. The Braves community has long supported their football program with students through The Tribe, and parents and fans coming to the games. This was the perfect ending to a spectacular and historic season for the National Champion Bosco Braves football team.