In this time of angst and uncertainty, Pope Francis hopes to shine a light through this cloud of darkness by delivering a prayer in a desolate St Peter’s Square. 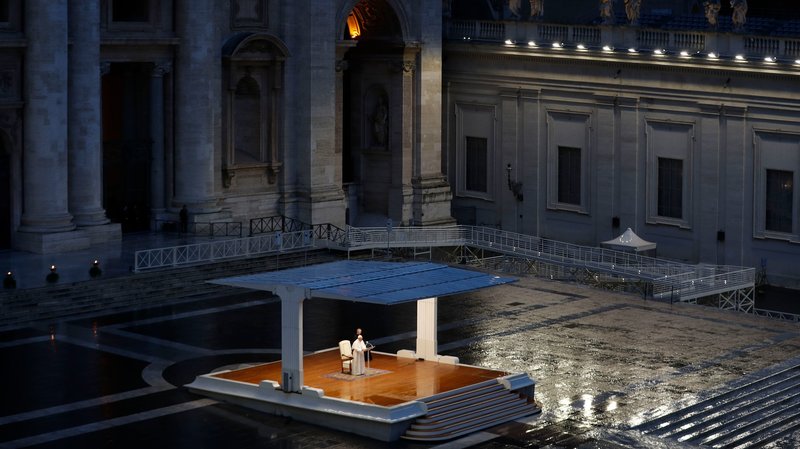 It was a rainy Friday in Vatican City as Pope Francis delivered his Urbi et Orbi blessing amidst the COVID-19 pandemic which has left more than 18,000 people dead in Italy. The Pope delivered the blessing in front of an empty St Peter’s Square in the heart of the Vatican City.

Speaking through the rain, Francis read from the Gospel where he urged the world to create a sense of unity and to comfort each other as times get tougher. Millions of people from around the world were able to tune into the Pope’s message via television and social media while remaining quarantined.

“We have realized that we are in the same boat, all of us fragile and disoriented, but at the same time important and needed, all of us called to row together, each of us in need of comforting the other,” said Pope Francis.

Amidst the empty square, Francis stressed the importance of hope and faith. The leader of 1.3 billion Roman Catholics was asking for perseverance from his people.

“Reawaken and put into practice that solidarity and hope capable of giving strength, support, and meaning to these hours when everything seems to be floundering,” said Pope Francis.

Pope Francis believes the crisis has shown the depth of our sense of helplessness before the present crisis, Francis suggested, is a measure of our modern overconfidence in “ordinary” times.

“False . . . certainties we have constructed around which we have constructed our . . . projects. The tempest lays bare all our prepackaged ideas and forgetfulness of what nourishes our people’s souls. We have gone ahead at breakneck speed, feeling powerful and able to do anything,” said Pope Francis

Likewise, Francis also praised the heroes who are on the front lines fighting this battle such as doctors, nurses, health care providers, police, grocery store employees and volunteers.

“Writing the decisive events of our time: doctors, nurses, supermarket employees, cleaners, caregivers, providers of transport, law and order forces, volunteers, priests, deacons, religious men and women and so very many others.We remember our families and the efforts of each of us to care for our families and our neighbors,” said Pope Francis.

The Vatican called the service “An Extraordinary Prayer in the Time of Pandemic,” and this pandemic is unfortunately still going strong. Nearly reaching 2,000,000 total confirmed cases worldwide, the USA currently having the most confirmed cases at over 500,000.