Posted on October 16, 2020 by The Brave News Leave a comment

The Los Angeles Lakers defeated the Miami Heat in game six on Sunday night to capture the franchises 17th NBA Championship – tied for most in the league’s history. 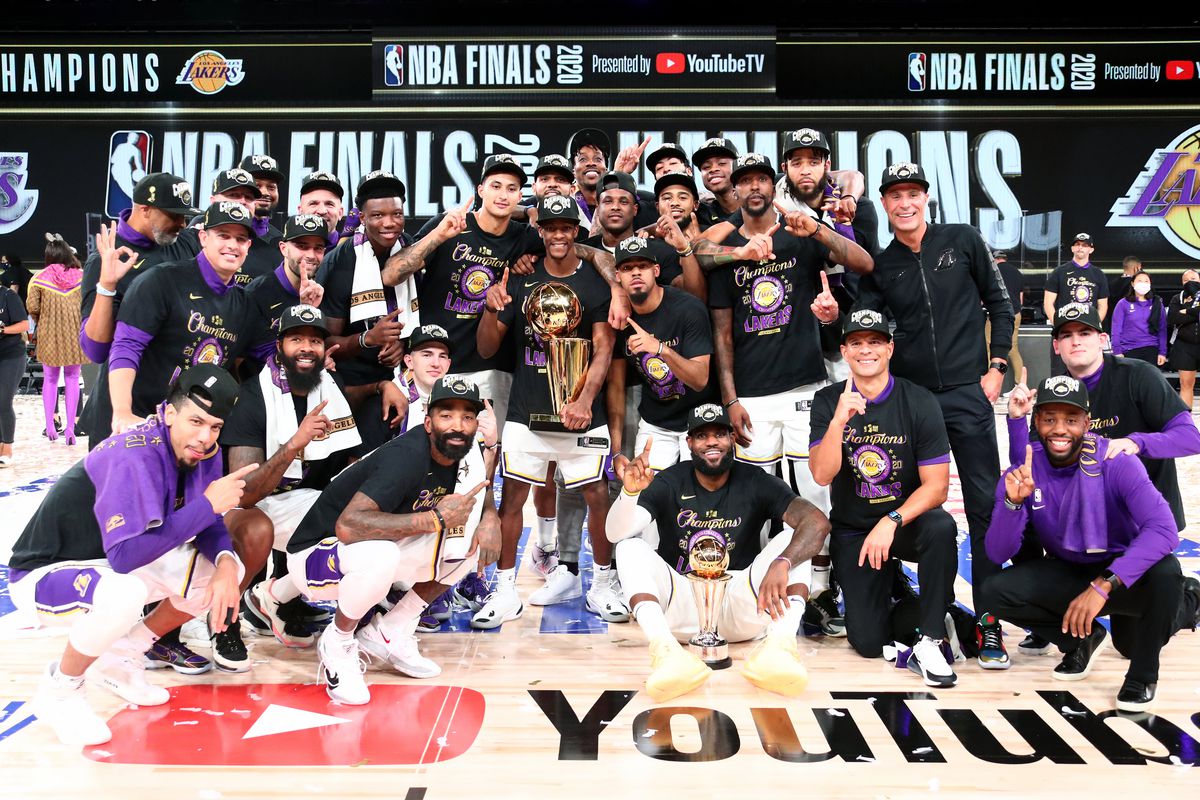 When the clock ticked to 0.0, there was confetti and jubilance everywhere in the mostly empty arena in Lake Buena Vista, Florida. The Lakers’ bench circled LeBron James, joyously hugging him on the court while Anthony Davis sat down on the scorers table, in disbelief as the emotions rushed over him.

The Los Angeles Lakers were NBA champions for the 17th time in their history after a ten-year finals drought, and on January 26th, the season for the Lakers took on a whole new meaning after the tragic death of Lakers legend Kobe Bryant, his daughter Gianna and seven others who passed away in a helicopter crash in Calabasas, California.

LeBron James and Anthony Davis led the way for the Lakers all throughout the remainder of the season and finally got the job done in their 106-93 win. James had a triple-double, ending the night with 28 points, 14 rebounds and 10 assists on his way to being named Finals MVP – his 4th time winning the award to go along with his fourth championship.

The win caps one of the most challenging seasons in franchise history. Following several years of missing out on the playoffs, the Lakers entered the season as one of the front runners to win after Davis was paired up with James. In his first year with the Lakers, Davis proved to be a difference maker and played big when the Lakers needed him the most during the finals.

After the COVID-19 pandemic, the season was thrown into uncertainty. Racial unrest in the country also threatened the season from finishing but at last on the 356th day of the 74th NBA season, the Lakers franchise claimed its 17th championship.

The victory was a lot sweeter knowing it was a hard earned championship as Miami wasn’t a walk in the park and a big reason for that was Jimmy Butler.

Butler stated after Game 5 that he and his team left everything they had out on the floor, but he was confident that they could win the last two games of the Finals and finish the Heat’s dream run inside the bubble. LeBron James and the Lakers didn’t let that happen.

James would set the tone at the opening tip by defending Butler, but if it wasn’t James, there would always be a Lakers defender on Butler everywhere he went on the floor.

They weren’t going to allow Butler to beat them. After Butler spent the past three months of his basketball life imposing his will on anyone who came in his path, the Lakers deflated the player who prides himself on being able to play every second if needed. They made Butler look human, and they made the Heat look tired. It ended one of the greatest postseason stretches by a single player and team in recent memory by Butler and the Heat, respectively.

Despite Butler having an impressive campaign, LeBron James made history.

Heading into these Finals, James was tied with Kareem Abdul-Jabbar (Milwaukee Bucks, Lakers) and Kawhi Leonard (San Antonio Spurs, Toronto Raptors) as the only players in NBA history to win Finals MVPs with more than one team.

In the 2020 Finals, James averaged 29.8 points, 11.8 rebounds and 8.5 assists per game. The Lakers’ title was their first since 2010, when franchise icon Kobe Bryant collected Finals MVP honors en route to LA defeating the rival Boston Celtics in Game 7. Overall, this is the 17th championship in Lakers history, tying them with the Celtics for most in NBA history.

The 2020 NBA Finals marked James’ fourth Finals MVP for his third different team. It was the sixth time in James’ career that he averaged 25 points, 10 rebounds and 5 assists in the NBA Finals. The other five players to accomplish that did it only once (Kevin Durant, Shaquille O’Neal, Hakeem Olajuwon, Charles Barkley, Kareem Abdul-Jabbar). James’ 28-point, 14-rebound, 10-assist Game 6 triple-double was his 11th, the most in Finals history.

The celebrations weren’t only in Lake Buena Vista, Florida as hundreds of Laker fans would gather in massive crowds waving Lakers flags through the streets and outside the Staples Center in Los Angeles.

All decked out in Lakers gear, fans chanted “Kobe! Kobe! Kobe!” through the streets of Downtown LA, which were lit with illegal fireworks launched from vehicles. Cars honked and people applauded from both inside cars and on the streets.

In the midst of the Lakers’ victory, fans forgot LA was in the midst of a pandemic for one night. Fans got caught up in the celebrations, having the Lakers’ on the forefront of their minds and neglecting the consequences that come with gathering in large groups with or without masks.

There is no set date yet for the Lakers’ championship parade because of COVID-19, but fans could not wait to get a head start on the celebration.

In a year where the COVID-19 pandemic threatened the end of the 2019-2020 NBA season and Kobe’s tragic death stunned the globe, Lebron James and the Lakers achieved greatness… but in the end, it was all for #24. 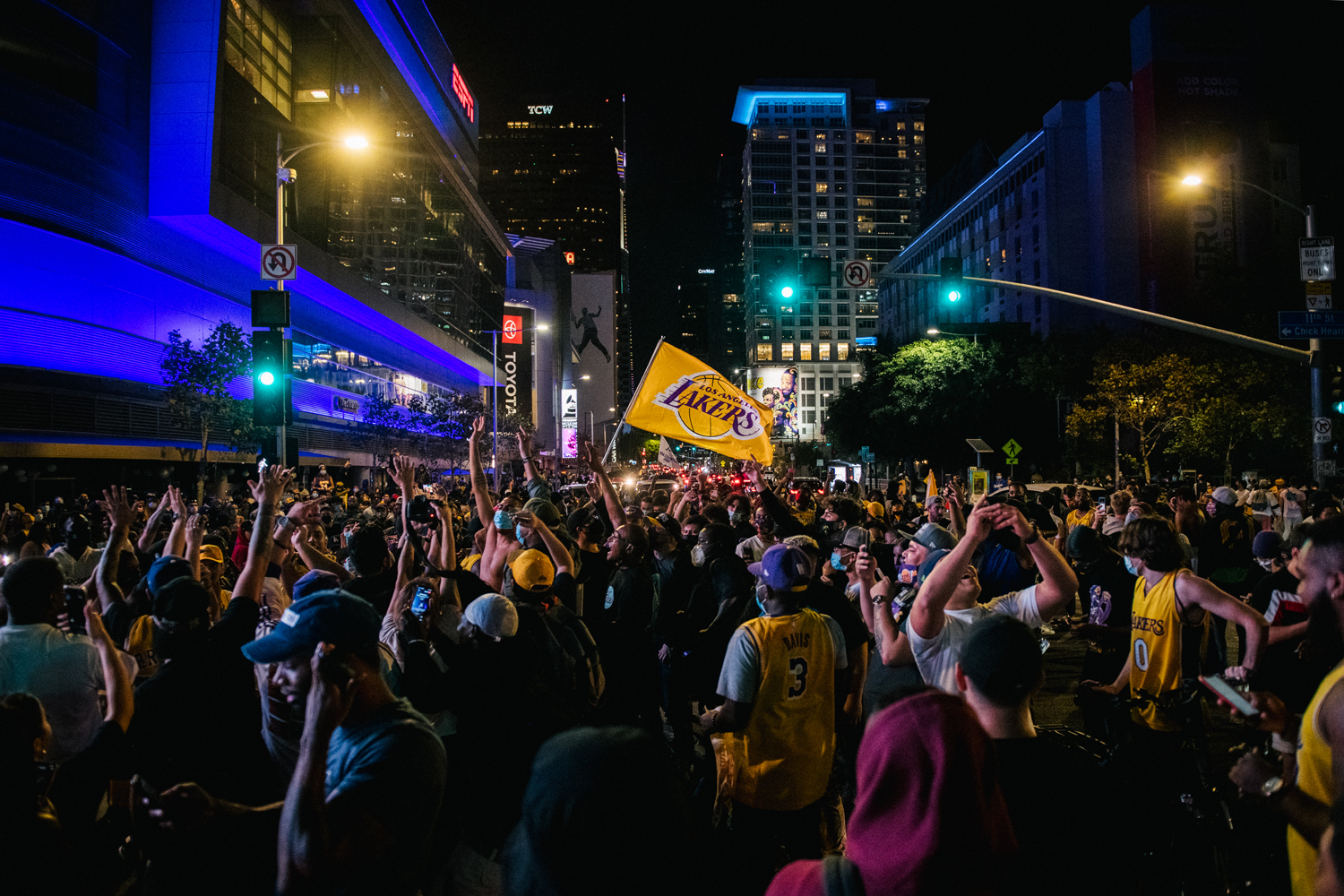