Posted on October 9, 2019 by The Brave News Leave a comment

St. John Bosco celebrated its diversity with its annual Club Carnival, where students had the opportunity to join some of the many clubs offered at Bosco, such as Seal Team Bosco, Key Club, Spanish Honors Society and more.

All the clubs had a table they decorated to attract the students’ attention. Throughout the event, students enjoyed a relaxed environment with food, music, games and friends, where students could learn about and sign up for clubs in which they are interested.

One unique club is Seal Team Bosco, an athletic minded club where Bosco students can meet new friends and teammates from our sister school St. Josephs. They practice and prepare for the Annual U.S. Navy Seal Invitational, where they compete against other schools and clubs. The team trains through morning runs and swimming, along with weightlifting and various skills related to military experience. Mr. Ed Torre, the club’s faculty moderator, trains the team and helps sharpen their physical and mental skills through the tough mentality of being a soldier.

Senior Noah Quezada was in charge of the table for Seal Team Bosco at the club carnival.

“We are a very dedicated group, who love to workout and build experiences together,” said Quezada.

But that’s not all. After the teachers’ approval, the students have to be approved by one of the deans with their signature and recommendation. Ms. Cindy Rayas the club coordinator is in charge of holding meetings in her classroom and is also a Spanish teacher at Bosco. The Spanish Honors Society also holds fundraisers where they sell pizza to raise money for different charities throughout the year.

“We had more than 30 kids sign up for the club, all meeting the requirements for the club,” said Miss. Rayas.

One of the most well known events they put on is the Dia De Los Muertos Celebration. This event is held yearly and includes all cultural parts of the Hispanic “Day of the Dead,” such as altars, pan dulce, tacos, and face painting to look like the traditional skeletons.

Seniors in the Spanish Honors Society also get to show off fancy cords marking their participation in the society when they graduate.

Another club is the Key Club, a service oriented club that offers a chance for students to make friends and complete service hours in a fun and easily accessible environment. Key Club is not a club specific to only Bosco students. It is a national and international club that many schools and organizations offer. Although not Bosco specific, the Key Club’s coordinator is Ms. Norma Aguilera, a Spanish teacher at Bosco. At their specific table, the Key Club had a poster featuring their past service initiatives, along with applications for new members. 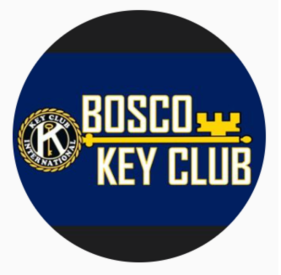 “I really enjoyed the table arrangements. I liked how they were in a circle and students could walk around and visit each club individually without a lot of foot traffic,” said Ms. Aguilera.

The 2019 Club Carnival allowed Bosco to show all it has to offer to its students. The way the event was set up, from the individual tables, the lawn games and the music, made possible this essential part of the Bosco experience.